Wettability and Fracture in Granular Media

Multiphase flow through granular and porous materials exhibits complex behavior, and the understanding of the underlying physical phenomena remains an ongoing challenge.  These systems routinely exhibit a complex coupling of phenomena linking pore-scale mechanisms to dynamics at the macro-scale.  A current example concerns the connection between the mode of gas invasion in sediments at the pore level governing whether methane hydrate forms as concentrated veins that are useful for energy production, or instead in a much more disperse manner.

Research in this area in the Dolbow Research Group explores the effect of important pore scale parameters, such as surface tension or wettability, on different macro-scale deformation patterns, such as fingering and fracturing, during the evolution of fluid-fluid displacement in quasi-granular media. This is motivated by recent experimental observations by our experimental collaborators (Ruben Juanes’s lab at MIT), of the morphology of medium deformation that arises in dense granular packs upon injection of an invading fluid (Figure below). The experimental system is a Hele-Shaw cell packed with soda lime glass beads that is saturated with a viscous defending fluid. Regarding the numerical modeling of the experimental set-up, a novel continuum based model is being developed at Duke to describe the coupled transport and fracture in porous media. The phase field method is being employed for the simulation of multi-phase flow, in which sharp interfaces between phases are represented in a diffuse manner, as well as the fracturing phenomena in the granular system. 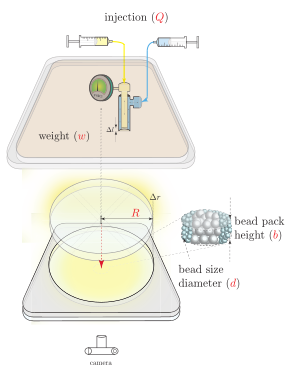